Read Mully’s Story from the beginning

Mully: When I got to Seattle, Skip was gone all day, five days a week. I didn’t know a soul and the only person I ever met was the woman  who worked in the laundromat. If you gave her ten cents she would switch your clothes from the washing machines to the dryers so you did not have to sit there and watch it all spin. 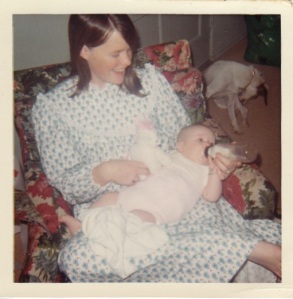 I didn’t know anybody. I loved being with Cere, so that was great! I started knitting and beading. I beaded these necklaces and I was really into them. I would put Cere in her little thrift store buggy and walk up to the University of Washington sororities and sell my beaded necklaces. I would also go to the Pike Place Market. I sold things on the street, and my knitted little baby parkas in some of the shops.

I had my own little world that I puttered around in. There was a pottery studio down at the market. Of course I thought that was interesting so I hung out down there. I was attracted to any artistic form of expression. I took classes and had a wheel. They were all weird and “on the verge” down there, so that was good. 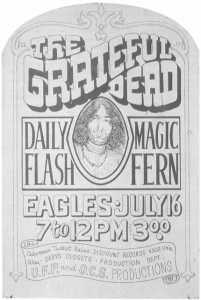 The Grateful Dead came to Seattle that year.  I put Cere to sleep in the Eagle’s Hall kitchen. At one point I went to check on her and there’s Jerry Garcia. In those days everyone was very approachable. I asked him “Do you think my baby’s ok?” He said, “oh yeah, I have a daughter named Sunshine, she hangs out with all of us all the time, don’t worry. I asked, “Are her eardrums going to be ok? and he “Oh yeah, no problem” So we just hung out.

More political stuff started happening by the end of that first year. That was when black students were trying to have more impact on college campuses.

I joined this group called Women’s Strike for Peace. They were all older. The age I am now. I thought they were ancient.  I was maybe twenty-two. They were probably sixty-five or seventy. They were the old guard. Seattle and Everett had the huge union and railroad movements. These women were there. They were just alive with progressive political activity. They were inspiring!

Skip and I got involved with the Students for a Democratic Society (SDS). It was all men up in front. I was on the periphery because I was the mom with the baby. We would go to meetings and I would have to leave the meeting, go out in the hall and play with Cere and then bring her back in when she was asleep. That was my relationship with the process. We were just kind of in this vortex of action. Everywhere it was happening, we were there.

We moved from our little basement apartment to this big classic house with a basement, an upstairs and a downstairs. We lived across from a draft resister’s office, which inspired us to join this organization, GI Civilians Rights for Peace, I think it was called. We would go down to Fort Lewis and talk to all the guys in the Army down there; anybody who didn’t want to be in the Army but was drafted, anybody who didn’t think the war was a good idea but they were in it or going.

The GIs would often end up at our house on the weekends. Of course they would all smoke pot and we would eat all the time. They would help clean the house because they all had skills. So that was a whole other thing we did. I taught one guy how to knit and he knitted his girlfriend a sweater. It was so dear! We were twenty-three and they were something between eighteen and the same age.  We played all of the Beetles music; everyone was stoned all the time, except me and Cere. I would get a contact high, and Cere was always happy, the center of attention and love of the GI’s who missed their homes and family.

That was the year Martin Luther King was killed and Bobby Kennedy was killed. We were just like, “What the hell is going on here?”

This was another vortex where I was one of the few women involved. It was my home and there were hardly any females anywhere. There were just all these sweet young men. It was pretty trippy.