A Note from Eliza: Working on editing this post with Mully has been an intense and thought provoking experience that went beyond the original conversation. She eloquently draws the connections between the issues of her youth and our present day. Her words are poignant. I have found myself examining my own life; how my daily choices are shaped by my own passion, impatience for change and apathy. I think many of us do feel despairing over the condition of the world, and yet her wise perspective and continued passion and compassion give me hope. Thank you so much Mully!

Read Mully’s story from the beginning

Mully: Skip found Stewart on Facebook recently. He went back to Wenatchee.  Can you imagine what his parents thought when their eighteen year old son left town, this pristine environment, and went off with his teacher, family and all these black students in a Volkswagen bus?

Anyway, after a few days on the road, we arrived in Berkeley. We stayed with our friend, Bill. He was a lawyer by then. He had a big house in Berkley with a bunch of people living in it. We all slept on the floor in the living room.  That first night, the phone rang at 2am and it was about People’s Park.The police had come in and were putting up a cyclone fence, cordoning off People’s Park.  This was to be the next big activity in our political world.

Of course I stayed home with Cere while Skip and Bill went over to the park in the middle of the night to negotiate. Many demonstrations followed and we went to all of them. They included the National Guard with their guns. Sometimes you put a flower in the barrel of the gun because that person was receptive or willing to communicate,  and other times people got shot with buckshot and tear gas.

One afternoon one of Bill’s roommates called to say he was in the hospital with some buckshot in his cheek.  He had been shot by a member of the National Guard. 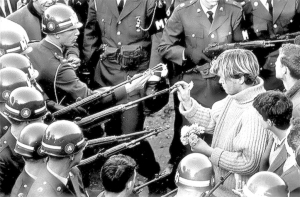 There were big marches where we all sang Give Peace a Chance, and Civil Rights songs. There were thousands of us marching through the streets of Berkeley.  But the park stayed closed.

At one point that summer we went to San Francisco to stay with my friend Patty and her family. They were on their way to Yosemite for a week, so we went with them. Isn’t that weird? There was my flip remark in Wenatchee, “Oh what’s the worst thing that could happen? We’re going to have to leave Wenatchee and go spend the summer at Yosemite” and that’s exactly what we did! We didn’t stay the whole summer though.

We wanted to live in Berkeley so when Skip saw an ad in the Berkeley Barb (one of the radical rags) for “Husband and wife with 14 month old daughter and dog, wants to share house with SAME”.  We answered and moved in, bringing our dog, Louise.

The house was near the new, People’s Park Annex.  We spent a lot of time there, and the husband, Jerry, who we shared the house with, and I built a playhouse in the park for all the children to use. That was a fun project.  That summer the United States landed the first people on the moon.

For the next two years we remained immersed in leftwing politics, including joining a working class organizing collective.  It was a branch of SDS, called the Revolutionary Youth Movement (RYM), lead by Bob Avakian. It was based on what Marx called “Point of Production Organizing.” Half the members worked in factories in the Bay Area, so Skip went to work for Kellogg, putting the raisins in the Raisin Bran. We had this lovely person, Mrs. Ting who took care of Cere for a couple hours in her preschool while I went out to do political organizing, and “consciousness raising.”

Meanwhile the Vietnam War was still going on, and so was the war against the Black Panther Party. Huey Newton had been arrested, and we were marching to “Free Huey.”We were talking to high school students about both wars. We were trying to bring new information about our government’s policies and actions, with the goal of changing people’s minds.  We attended marches and created educational programs.  We studied and debated “what was the politically correct action to take?”

There was another faction of SDS that formed around 1969 in Chicago called the Weatherman. The Weathermen’s politics were a bit more difficult to categorize.  Their name was taken from the Bob Dylan line, “You don’t need a weatherman to know which way the wind blows.” Their leadership was mostly from the East Coast. Their approach was to fight from within what they called “the belly of the Monster”

The “Monster” was the Imperialist, political system that was moving around the world creating wars in an attempt to control the natural and political resources that the “Capitalist pigs” wanted for their own greed and aggrandizement.

This basic analysis of capitalism and the insidious control that the corporations hold over the people within and without the United States, plus the desire for a more egalitarian and peaceful culture, were the fundamental motivations of both the RYM and the Weathermen, but they had different approaches.

The Weathermen were more impatient for change than the RYM. They thought they knew what was right. They came to Berkley to recruit us. They were gut checking, making us feel guilty if we didn’t get involved. “Would we risk our lives for freedom for all?  Would we give up our families to fight to end the war within, and the war without the United States? “

These were our questions, our struggles. We were privileged by virtue of our white skin and our middle class upbringing.  We were torn apart by the disparity between our values and our own lives. My heart was in solidarity with the black community and their struggle for dignity and freedom. I also cared deeply about the plight of the Vietnamese people caught in a war zone. It was a complicated and confusing time.

When members of the Weathermen group in New York accidentally exploded a bomb in the basement of one of their homes, several members were killed. The survivors went “underground” and the lyrics of another Bob Dylan  song, “The Times, They Are a- Changin” became more obviously true.

I have seen two films about the Weathermen in the last few years. In the documentary called Weather Underground, many of the core group of people, including Bernadine Dohrn, Bill Ayres and Mark Rudd were interviewed.  Only Mark Rudd spoke with any remorse about their activities. 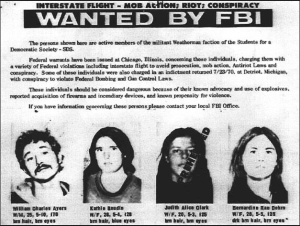 Because of the townhouse bombing, the Weatherman became known as an organization of terrorists.  They had to go underground, they were on the FBI most wanted list. However, when time passed, they still had their white skin, their money and their education. They were able to make their deals with the feds, come back above ground and lead a leftwing version of the American life.

Reflecting on these past events has really made me think about what would drive a “regular” person to such extremes?  So many oppressed people are “good” people. They are loving parents, or partners, siblings, grandchildren.  There is such frustration and anger in feeling helpless or hopeless to effect change.  Similar activities are  still happening today; think about the suicide bombers in Iraq, the IRA in Ireland and the  Buddhist monks and nuns self-immolating in Tibet.

It is not a logical response. It is an emotional response. It is desperation; a feeling that there is nothing else left to do, perhaps stemming from a youthful passion and lack of perspective.  It is an intense reaction to the profound internal conflict between compassion for the world and anger at the enormity of the inhumanity.

I felt that discord. It was like riding the untamed horse of conflict.  I  was externalizing my anger about the repressive culture of my family as a child as well as my own experience of oppression as a woman and citizen of this country with all these inhumane policies. We all wanted to disrupt and disassociate ourselves from  the  controls of the system. We were fighting for both our personal and our political freedom; a fight that still exists today.

Over 40 years later I have done a great deal of reflecting upon the vortex of change that was the 60’s and 70’s.  Now my spiritual path has led me to Buddhism, and I have learned more about addressing my own angst by looking within myself instead of pointing fingers at others.  This is the opposite way of responding to external circumstances. Buddhism is teaching me to address my own internal issues:  to look at myself at the marrow and not blame my  experiences or circumstances on external conditions.  Buddhism teaches  me compassion and empathy for myself, others, and for all living beings. 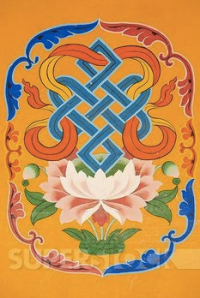 Without being a student of Buddhism during this era of my life, or knowing these principles, but looking back at myself,  I can see that the motivating forces behind my choices were the way I resonated with the pain of others,  and my desire to relieve their suffering. Studying Buddhism has helped me to understand my choices then and it influences the decisions I make every day.

Because of my own experience of oppression, even within the movement, I was always looking for companionship and meaningful work with and for women and children.  This led me to the Red Family and eventually to living here.